A famous Russian proverb says: “A mile walked with a friend contains only one hundred steps.” And to integrate the Eurasian economies along the New Silk Road is a very long journey. UTLC‘s main goal is to provide the world’s best service on the Russian, Kazakh and Belarussian railway corridor. To operate profitable rail freight trains between China and Europe.

UTLC is a freight forwarder on the OBOR corridors. The firm has been incorporated in 2014 as a joint-venture company between three railway network operators in Russia, Belarus, and Kazakhstan. So the companies competitive advantage is very much linked to the strong and reliable market position of its shareholders. 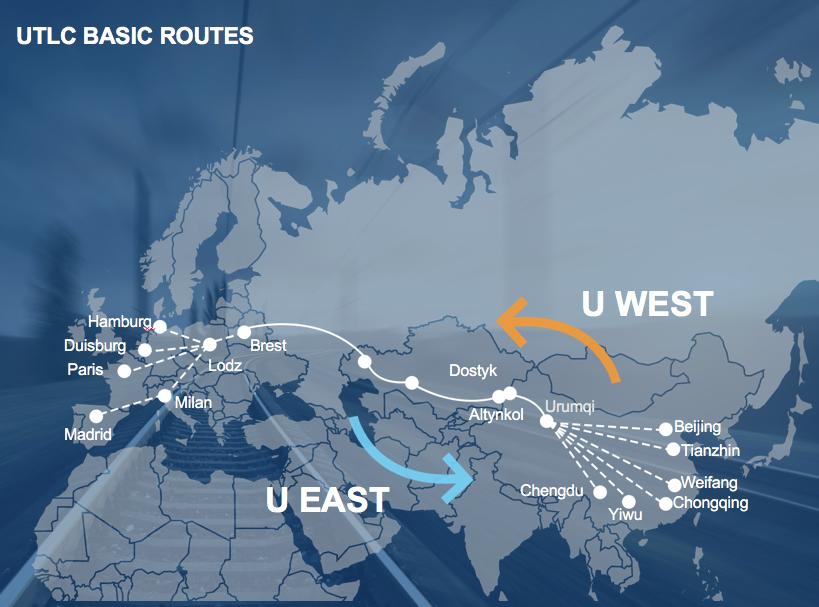 Ask for market positioning, UTLC’s President Alexey Grom, elaborates: “On the other hand – UTLC is providing additional benefits in terms of technological and technical cooperation between carriers, wagon and terminal operators, forwarders. Focusing on the above-mentioned cooperation, our customer-oriented strategy is to be the most cost effective and high standard service provider on the main Eurasian railway transit routes.”

In 2015, UTLC was still following two different business models. The shareholders decided to turn the company into an asset-light service provider and scale operations quicker to fully benefit from the current market environment. Today, UTLC is the largest operator of regular container block trains between China and Europe on the 1520 mm gauge.

Operations on the primary route start at the Kazakhstan/Chinese border and end in Brest on the Belarus/EU border. UTLC calls this service «U-WEST». The «U-EAST» service begins in Brest and ends in the terminals of Dostyk or Altynkol in Kazakhstan. To harmonize the supply chain management, UTLC has created a very familiar business model which is very similar to deep sea carriers. Clients in China, that would usually ship their containers via a seaport, now drop the goods at an inland dry port. UTLC takes care of organizing all other services, so it is basically a railway shipping line. Also, the company has worked extremely hard on their response time and flexibility and claims that they can organize and dispatch a freight train within 4 hours after the commercial terms have been agreed.

How much rail freight volume is UTLC handling?

Asked for the performance of the company, Alexey Grom, explains: ” Today we run anywhere from six to eight trains in both directions on daily basis. If market growth continues, we would have a significant amount of reserve capacity to organize more trains per day. In 2016, we have shipped more than 100.000 TEU (Twenty-foot-equivalent unit) in U-WEST and U-EAST. Compared to 2015, we managed to more than double our freight volumes, which was 47.000 TEU that year. An achievement that we are proud of and we anticipate further growth.” 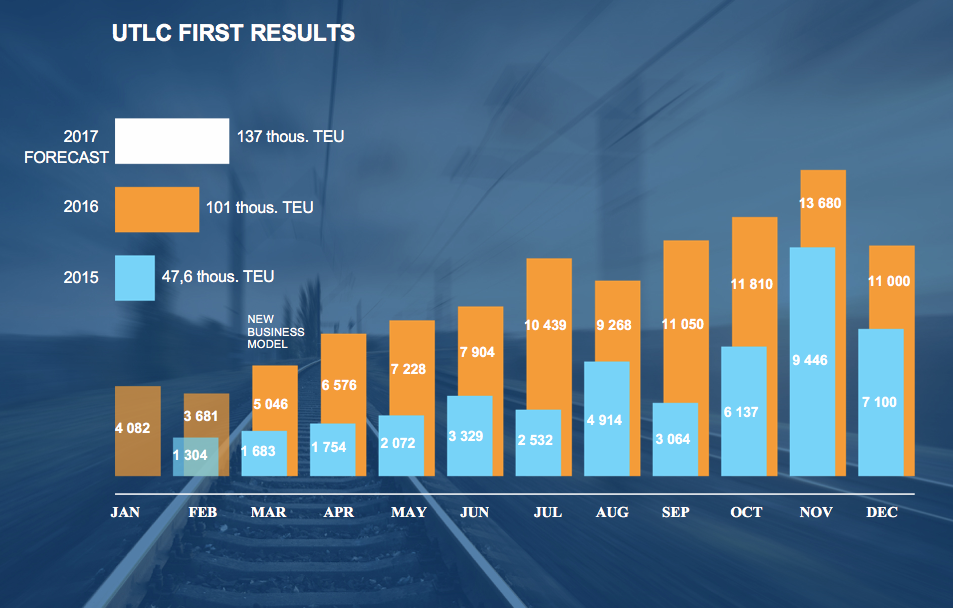 The goods transported are mostly electronics, auto components, industry equipment, clothes and food products. Recently UTLC has developed a new service proposal for specialized that can be heated up and cooled down. The company assumes, that this innovation will open up new market segment within the chemical and food industry.

Alexey Grom, highlights: ” Our container block train cover a distance of 5430 km in five to six days. Overall rail freight transport from China to Europe is three times as fast, compared to ships. Consumers will want their deliveries even quicker in the future but are not willing to pay an air freight premium. So for our customers, that want to accelerate their supply chains because they sell time sensitive goods, we offer a real alternative to deep sea shipping.”

The dynamic of trade between the two worlds major economies – China and Europe – is showing stability and even delivered some growth in 2016 compared to 2015. The growth of container traffic by sea on the main trade line between Asia and Europe is estimated to grow by 3.6 percent in 2016, equalling 22.1 million TEU. In 2016, the Asia Pacific region became the largest air freight market with a share of approximately 35 percent of the global freight volume. Rail freight has doubled from 2015 to 2016 and this growth has mainly been driven by the basic route of UTLC. 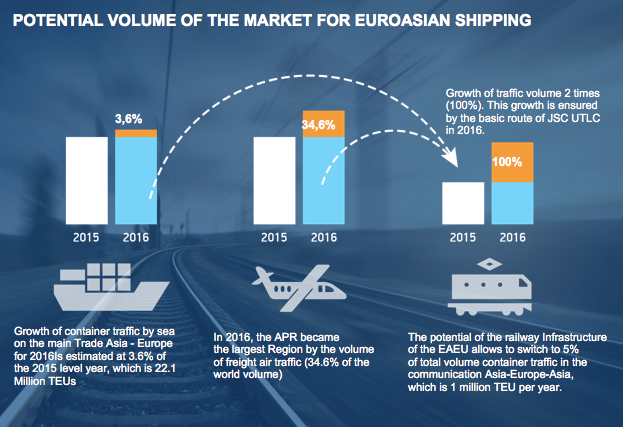 According to UTLC, the railway network has a capacity potential of roughly one million TEUs per year. That would allow shifting five percent of the total ocean shipping container volume to rail.  The key role of China in cargo flows and the orientation towards land corridors make a strong business case for corridors and players. And that is one reason, why UTLC is able to attract more and more partners to their service. Today a number of European and Chinese railway operators have joined forces amongst them are, for example, DB Cargo, HUPAC, Hellmann, Interrail, PKPCargo as well as CDIRS, YUXINOU and CRCT.

Asked about the future, Alexey Grom, shares: ” China, the European Union and the countries of the Eurasian Economical Union have a mutual interest to do business together. The rail industry in these countries is known as one of the most important and social oriented. A good and effective cooperation in Eurasian rail projects equals a one in a lifetime chance to bring prosperity and benefits to all of the people along the rail corridors. We see UTLC’s future as an important member of our common Eurasian railway family with a goal to positively contribute to the success of OBOR.”