While the whole world is aware of just how mainstream the electric car has become, has anyone started to think about how much of a positive impact electric trucks could have on the environment? Well, the German luxury car manufacturer Daimler has been working hard developing the Urban e-Truck. The first fully electric lorry that comes with the ability to carry a combined weight of 26-tonnes. Impressed? You may well be.

Before investigating the Urban e-Truck in detail, let’s have a look at Europe’s transportation market. According to Eurostat a total freight volume of 3,524 billion ton kilometers (tkm) had been delivered in 2014. With 1,725 billion ton kilometers (close to 50%) the majority of goods had been sent via the road. In comparison short sea shipping accounted for 32% (1,122 bn tkm), railways for 12% (411 bn tkm), inland waterways for 3% (151 bn tkm) and air freight for less than 1% (2 bn tkm).

The European Automobile Manufacturers Association (ACEA), announced that in 2016, the market for new heavy commercial vehicles (HCVs) over 16 tons (excluding buses and coaches) grew by 12.3%, reaching 292,170 units. All major markets increased the number of registered vehicles, especially Italy (+52.9%) and France (+12.9%) with their double-digit growth. 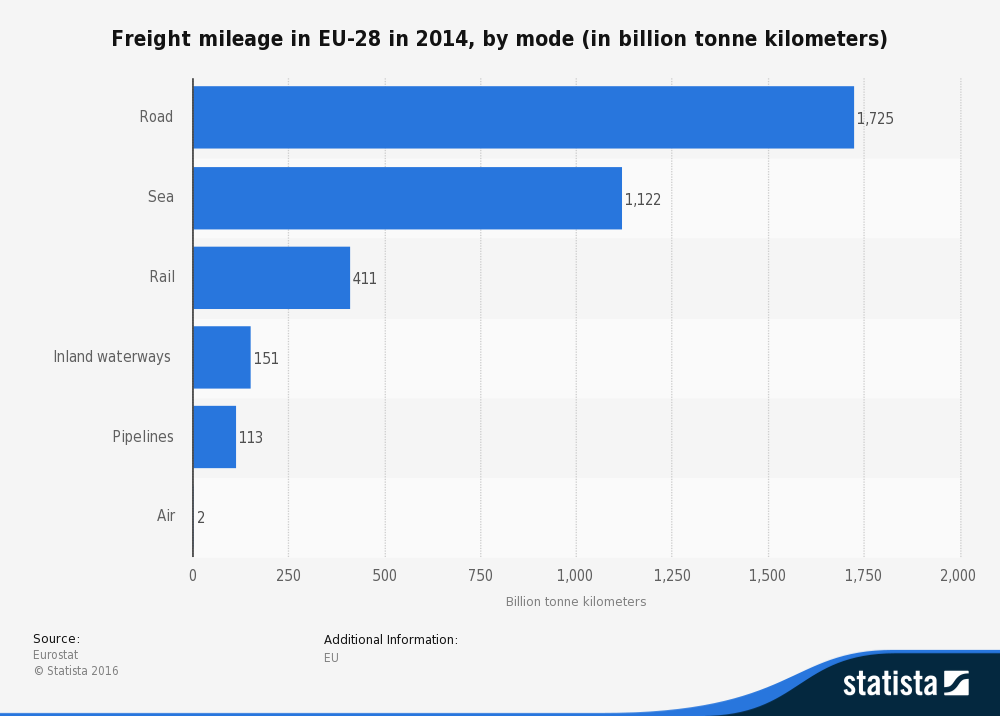 What about the environmental impact?

Considering the environmental impact, the majority of greenhouse gas (GHG) emissions from transportation (20% of all emissions within Europe) consist of CO2 emissions resulting from the combustion of petroleum-based products, like gasoline, in internal combustion engines of HGVs. Over the 1990-2011 period, emissions from road transport grew by 21%. Whereas new trucks need to comply with EURO VI norms, meaning they run on combust engines that reduce fuel consumption and CO2 emissions significantly, the today existing HCV fleet causes a severe environmental impact. A breakdown by mode shows that road transport has dominated emissions and with further fleet growth this trend is expected to continue.

Greenhouse Gas Emissions in EU 28 in 2015, by mode Source: Eurostat

How does the technology function?

Hence, the time to make a change has come, and that is exactly why e-mobility can slot seamlessly into the transport industry. What has held back the implementation of electric vehicles is the battery technology and range limitations. However, due to constant improvements in battery capacity, the cells are now capable of storing enough energy to not only power a vehicle but also power them over greater ranges with increased payloads. Alongside this comes a decrease in the costs associated with this technology and that alone makes it feasible to introduce it into heavy e-mobility vehicles.

The Urban e-Truck consists of three battery packs that produce 212kW of power. The Lithium-ion batteries have a range of around 200km and the ability to work in a wide range of temperatures. The system has been designed to allow quick charging using a standard household plug for times ranging from 1 hour to 7 hours to fully charge. The direct current charging with an external station is crucial for heavy-duty trucks helping to save weight. The Urban e-Truck also has a unique E-Axle which is at the heart of an efficient drivetrain. It offers a permissible axle load of 11.5 tons which competes with a traditional drivetrain while additional space has dedicated to batteries.

Many benefits come with the Urban e-Truck, and one of the more notable advantages is the fact that it contributes towards the decarbonisation of transport. They help to improve air quality, reduce noise pollution while also having the ability to access restricted zones. The Urban e-Truck is an HGV that is perfect for inner city use cases, for example, supermarket and mall deliveries. But it is also a truck that can enhance profits due to the way that running costs are reduced. These are all impressive positives that favor this new technology. However, the successful market introduction is depending on the price of the battery packs that determines to a large degree the price of the truck.

The safety features of the Urban e-Truck are of an enormous benefit to both the driver and owner. Sophisticated detection systems warn drivers of pedestrians and cyclists positioned alongside the vehicle while there are both visual and acoustic warnings of a collision before initiating the braking system. Incorporating these detection systems into the Urban e-Truck is an industry first and certainly sets the truck apart from other options currently available.

Summing up, Daimler is certainly looking to make a bold move into the development and implementation of electric vehicles, in particular with the Urban e-Truck.This technology is all about creating a sustainable supply chain that reduces operational costs as well as GHG emissions and noise in inner cities. In 2020/21 after its market launch, the Urban e-Truck is expected to provide last mile electromobility for freight forwarders in Europe.