Heavy Commercial Vehicles (HCVs) produce about 20% of greenhouse gas emissions in the EU  – a greater share than international aviation or shipping combined. Despite improvements in fuel efficiency and new standards e.g. EURO VI, the total amount of CO2 emissions from HCVs rose by 36% between 1990 and 2010, due to the ever increasing number of road freight traffic. Also, Europe does not possess significant amounts of oil resources. Therefore any innovation that helps the transport sector become independent of fossil fuels should be monitored closely. The Siemens eHighway provides such a solution and is now being tested for commercial operations in Sweden, California and Germany.

So trucks are essential to Europe’s transportation system, but several key obstacles stand in the way of efforts to electrify freight vehicles in the way that is increasingly being done for cars and buses. For instance, the weight of batteries and hydrogen (or other forms of onboard alternative energy storage) eating into payloads and therefore profits. Missing infrastructure to charge batteries and refuel hydrogen tanks. In this context, the Siemens eHighway is one of the latest attempts to remove these obstacles from the road towards electrified road freight and one of the few to offer a solution that is being hailed as potentially workable in its current form.

The solution provided by Siemens eHighway utilizes methods that are already very familiar from the decades-old electrification of the world’s railways. It bypasses the problem above of battery weight as well as the challenge of long charge cycles by supplying power to moving vehicles from an external source. The constant power supply is done via overhead power lines (catenary) in much the same way as an electric locomotive is equipped. The key innovation of the Siemens eHighway is the intelligent pantograph that detects the overhead catenary system, establishes a connection and does it all while driving at speeds up to 90 km/h. Furthermore, trucks use regenerative breaks which decelerate the vehicles by converting its kinetic energy into a form which can be either used immediately or stored until needed. This system is currently mostly being developed for hybrid vehicles, but could also potentially power fully-electric trucks. 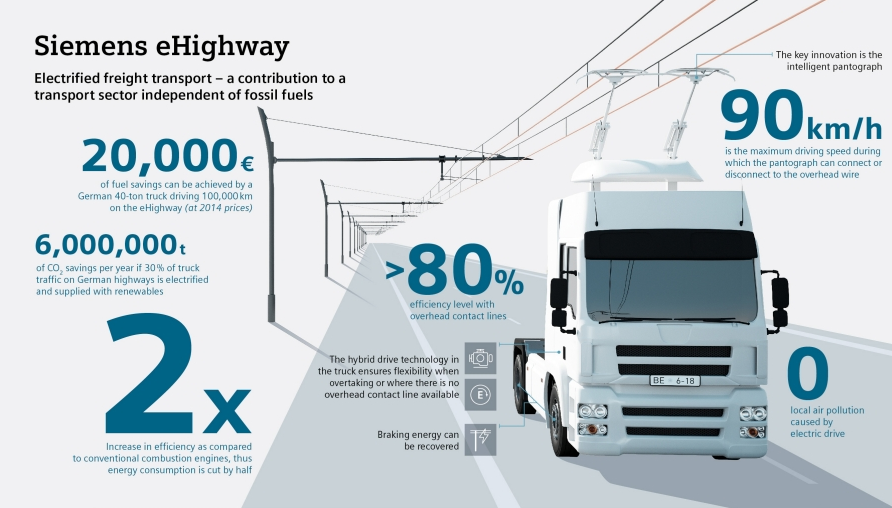 How high are the technical risks or is the innovation market-ready?

Before the Siemens eHighway is ready to be commercialized, further testing work on mechanical (reliability of the pantograph and endurance of regenerative brakes), as well as operational (overtaking, sharing of roads with electrified/ non-electrified vehicles) aspects, have to be completed.

The Siemens eHighway has undergone a rather significant and insightful period of testing in Sweden, in partnership with HCV maker Scania. The country, which aims for fossil fuel-free transport by 2030, has become the home of the first eHighway, and further pilot schemes have followed in association with transport authorities. Testing has also taken place in California, in partnership with another Swedish automaker in the form of Volvo, and in Brandenburg in Germany. All three test tracks are currently used to host ongoing pilots of the system.

The Californian test track is located on Alameda Street which is running parallel to Interstate 710. Roland Edel, the Chief Technology Officer (CTO) of Siemens Mobility highlighted in a recent interview that Siemens built a 1-mile catenary system in both directions to test the technology under real market conditions. The Interstate 710 connects the harbors of Los Angeles and Long Beach with a rail freight terminal. According to Edel, 45% of all American imports arrive in these two harbors.

Very recently news broke that Siemens technology will be deployed on two highway stretches in Germany in 2019. From the harbor in Lübbeck until the logistic center in Reinfeld, a 6-kilometer long section of the German Autobahn 1 will be equipped with a caternay system. The second project features a 15-kilometer stretch connecting logistic facilities in Darmstadt with the Frankfurt airport. The German Ministry of Environment is co-financing the project with 28,6 million EUR, targeting a reduction of greenhouse gas emissions. Additional partners are the freight forwarders Bode in Schleswig-Holstein and Ludwig Meyer as well as Adam Schanz in the state of Hessen. The tests are financed with 3 to 4 million EUR per trial and companies can apply for government funding through the German Ministry of Environment.

The advantages of the Siemens eHighway are undeniable. It provides a seemingly practical step towards the decarbonisation of transport. The technology eliminates some of the key drawbacks of other methods in the form of battery weight and charging times – both serious money-drainers to a profit-making, private sector. Unlike many other such solutions, it is primarily built on existing, well-tested principles as similar technologies have been used by electric trains and trams for decades. According to Siemens, the eHighway is being claimed to offer twice the efficiency of the traditional internal combustion engine when used with hybrid vehicles. Carbon emissions would be cut significantly with the use of eHighway-powered hybrid vehicles and one day, with fully-electric trucks and renewable energy sources, it could lead to carbon-free freight transport if we use renewable energy sources to power the grid. Lastly, the technology also offers the potential for adaptation to other applications in which it is necessary to move heavy payloads, such as mining or shuttle operations.

The main drawback of the Siemens eHighway stem from the need for specialist infrastructure to supply the electricity. While the operation of electric road systems carries lower costs than other energy sources, the initial costs of developing this infrastructure and equipping vehicles with the pantograph and regenerative brakes would be a massive investment and therefore risk, that is unlikely to be carried by road freight operators alone. The eHighway would also be restricted to roads where this infrastructure exists. As the idea of installing overhead catenary across Europe’s highway networks is, frankly, unlikely, this would limit the operation of the system’s electric trucks to specific corridors. This restriction is fine when freight is bound for destinations along major routes but means most vehicles require a hybrid engine (either diesel/battery/hydrogen powered) on the last mile before the cargo can reach its final destination. It also means that the adoption of the system for longer journeys, particularly international freight, is likely to be slow as it would take a politically driven cross-country financing solutions for the primary catenary system to be installed.

The Siemens eHighway combines proven technical systems such as pantograph and catenary systems, regenerative brakes and hybrid engines to electrify road transportation. The flexibility of road vehicles is leveraged while major benefits such as efficient fuel operations that will drive operational costs down as well as the significant reduction of pollution both in emissions and noise can be achieved. For the commercial introduction on European highways, massive investments in infrastructures and vehicles are needed and call for political action as a catalyst at least.