On the Rail Freight Corridors (RFCs), Railway Undertakings and Applicants such as shippers, freight forwarders and combined transport operators can request pre-arranged, cross-border train paths at a single contact point, instead of having to submit individual requests to several national Infrastructure Managers (IMs) – this will lighten their administrative burden and speed up proceedings. 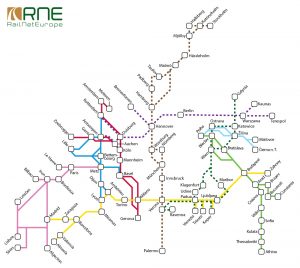 Yet for parts of the European rail network where no new corridor organisation is planned yet, RNE is maintaining its RNE Corridors for the benefit of both, the Infrastructure Managers and their customers. RNE Corridors bring quick wins, for example a tried-and-tested service portfolio that can be adopted with little effort by the involved parties. They may also help Infrastructure Managers to get acquainted with the requirements of any future RFC membership.

The six new corridors will be complemented by three other RFCs (Scandinavian-Mediterranean, Baltic-Adriatic and North Sea-Baltic) ¬– set to become operational by 10 November 2015.