Combined freight transportation requires deep in-house expert knowledge, mastering of complex logistics processes and frequent, precise communication amongst involved supply chain actors. However a lot of market information is kept intransparent. For example detailed insights on terminal locations, railway freight lines, over capacities, pricing and costing of operators and last but not least punctuality of shipments are difficult to foster. That is why many logistic firms avoid using intermodal transportation, even though compared to road transportation on longer distances it is less easy to interrupt due to accidents and traffic jams, economically competitive and has a better environmental footprint. 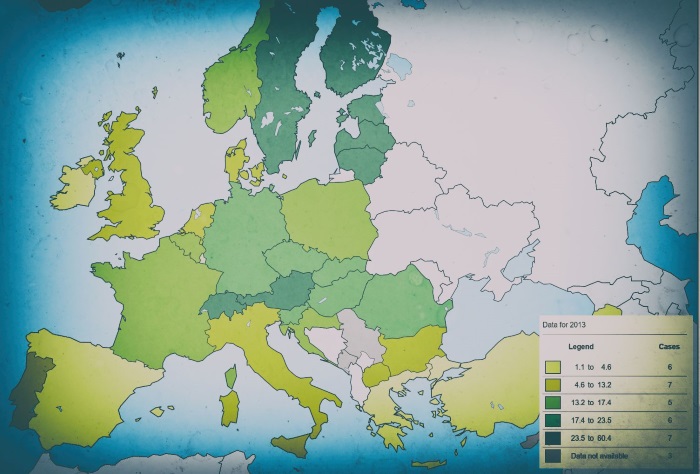 In alpine countries such as Austria and Swiss freight transportation on the rail ranks high up on the political agenda. Historically the transport running much faster in railway tunnels instead of road passes. Political efforts and policies have been made, trying to open up the railway market which lead to a catch-up in competitiveness of railways compared to road transportation. In addition the the publicly accessible railway data is an enabler for upcoming disruptive software solutions and new business models.

As part of the EU funded study “User-friendly access to information about last-mile infrastructure for rail freight” the International Union for road-rail combined transport (UIRR) together with HaCon and Triona AB developed a pilot portal railfreightlocations.eu for the last mile rail infrastructure. An online map visualizes the approximately 4000 rail freight locations in Europe and details information for example on operator contact, transport nodes and critical infrastructure.

Furthermore, the german promotion centre for Intermodal Transport SGKV is offering a similar database with their intermodal freight map. 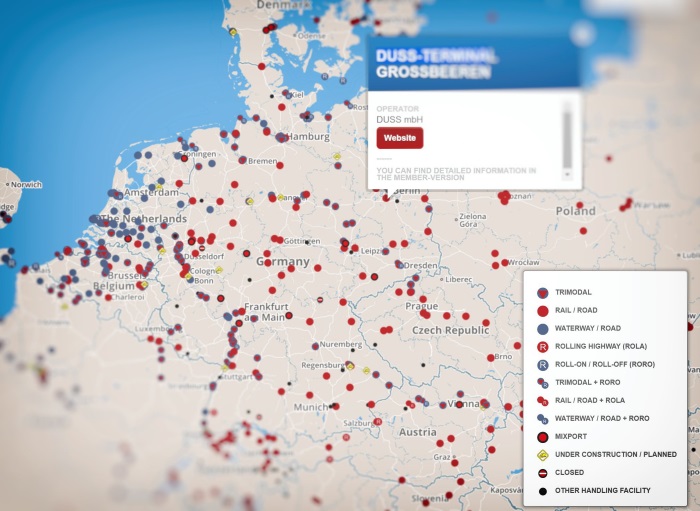 Thirdly we would like to point your attention to another interesting data source which has been made available by the very active openstreetmap community. Since mid 2013 the OpenRailwayMap  displays data on the world’s railway network, based on Open Street Map and  also aims to support railroad-related data. 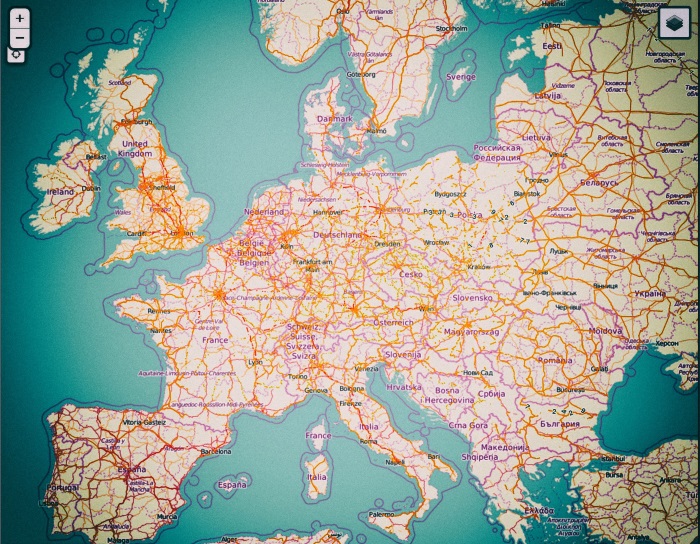 In addition, the OpenRailwayMap also delivers highly detailed maps on intermodal terminals, which allow infrastructure managers and terminal operators to improve location and capacity planning of vital intermodal hubs across the network. The level of detail of the terminals and tracks in Europe is breath taking. With a detailed mapped railway infrastructure the community could develop rail routing applications like it is available routing service for trucks in open street map. 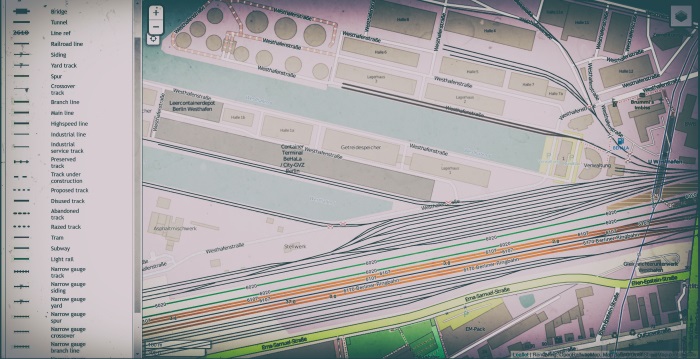 OpenRailMap can be used as Basemap for realtime traffic and visualize the capacities between the terminals. The both terminal maps based on OpenStreetMap, so it is quite easy to extend the terminals with the freight rail connection with the OpenRailwayMap data.

RailNetEurope (RNE) is an association set up by a majority of European rail infrastructure managers and allocation bodies to enable fast and easy access to European railway corridors, as well as to increase the quality and efficiency of international rail traffic. Together, the current 35 members of RailNetEurope are harmonising conditions and procedures in the field of international rail infrastructure management for the benefit of the entire railway industry. 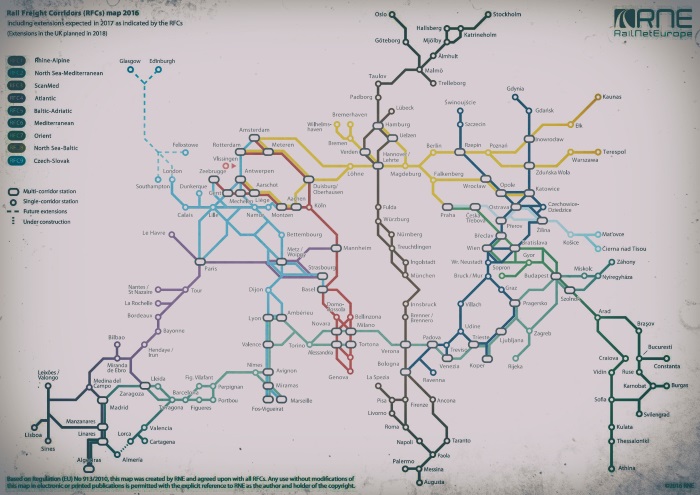 RailNetEurope provides detailed information about the nine main Rail Freight Corridors with timetables, terminal information in XLS and PDF format for infrastructure managers as Corridor Information Document. Recently RNE published for the Rhine-Alpine Corridor the corresponding GPS data for online maps like Google and Open Street Map are available. This is a big step ahead to make these information accessible to everyone.

Map of the Rhine-Alpine Corridor with the corresponding GPS positions

Last but not least, Europe’s market leading railway operator Deutsche Bahn started an Open Data initiative to integrate and make use of their existing data sources.  This includes publicly available information on machine readable data in Excel and CSV as well as geolocations in JSON format. Especially the data sets about the German Rail network and the mobile communication coverage along the rail track are very useful insights to be integrated in an holistic understanding of the railway networks of Europe. 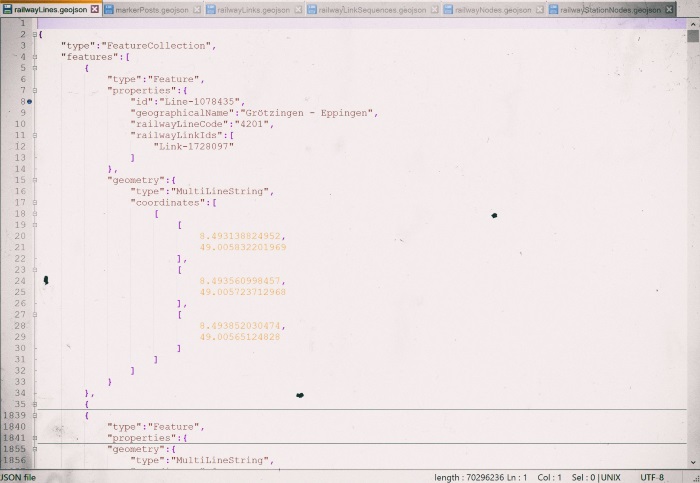 The biggest challenge is now to integrated these various sources of data with custom built interfaces and make meaning for all involved stakeholders, instead of using buzz words like “Big Data” or “Railways 4.0”. This can be done by applying Machine Learning tools to foster, analyze and interpret the public accessible railway data. Today the leading tech companies Google, Amazon WebServices and Microsoft Azure are offering Machine Learning as a Service (MLaaS) which are great tools to build innovate software solutions based on large amounts of data. DB Netze published their loading points and dispatching tracks as human readable PDF on their website. It is expected that this information will be available as machine readable and open accessable data.