The Lohr Railway System is a fairly well-established horizontal loading technology to shift semi-trailers from road to rail. It has been in operation since 2003, though currently still only in service on two major routes. During the last 14 years, the Lohr group claims that it has taken over 500,000 trucks off the road onto the railways, saving more than 300,000 tons of carbon emissions.

Modalohr is a versatile road-to-rail horizontal loading system. The specially-designed, double-articulated wagon allows conventional semi-trailers to be transported by train on standard UIC railway tracks. An exceptionally low floor of the rail wagon keeps total heights within the tunnel limits that most of Europe’s rail networks can handle.

A unique horizontal loading system facilitates fast, efficient loading and unloading and quick transfers between road and rail. The wagon does not require any onboard machinery. Fixed ground equipment located at the terminal enables the intermodal switch off the semi-trailer. Currently, the system is in use on two routes: Bettembourg-Perpignan and Aiton-Orbassano.

Where is the network operating?

With the continuously growing need for transportation and the political will to invest into the decarbonisation of mobility, Lohr has developed an attractive system. That is why plans for expansion include new terminals in Europe, in particular with a focus on growing the network towards the East. DB AG Consulting has been involved in the planning for a new terminal in Berlin, which is also visualized in the network map below. 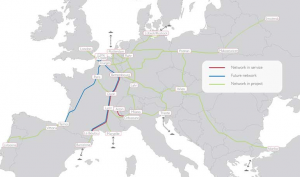 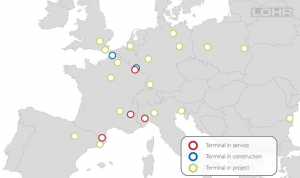 Usually, only containers, swap bodies or modified semi-trailers have access to combined transport. The key advantage of the Modalohr system is that it opens up the rail transport market to all semi-trailers (approximately 97% of the market).  This causes some knock-on effects. Firstly, carbon emissions for rail freight are significantly lower than for equivalent road carriage, so increased emphasis on railways is a big step towards the decarbonisation of transport. Secondly, for long distance overland transports of above 500 kilometers and in particular through the Alps, the railways are faster, cheaper and more efficient. Thirdly, shifting trucks from road to rail also decongests the road network which is a benefit for the society as a whole.

The main disadvantage of the Lohr System is that it requires a relatively heavy rail wagon, which increases the energy consumption and therefore operational costs. The terminals are built in a customize way and, due to the required number of loading bays and the needed space to maneuver, large in size. This makes it difficult to find locations in densely industrialized zones and leads to a big initial investment fixed at a particular position which equals risk.