The future of Europe’s railway system is brighter than many think. Because for the four infrastructure projects we are profiling in this article, the overall investment reaches a staggering sum of € 37 billion. Here at Combined Transport Magazine, we think that this tax money is wisely spent as it is not only giving people jobs and income but as a result, the whole European railway network will increase in capacity and sustainability. So which infrastructure projects are we referring to exactly?

The Gotthard Base Tunnel was constructed over the last 17 years and opened its operation in December 2016. From the approval by Swiss voters to the final breakthrough, it took as many as 2,400 workers at peak times to drill the tube through the massive Alpine mountains. With a length of 57 kilometers, the tunnel is the longest railway tunnel in the world. In some places, there are 2,300 meters of rock between the tunnel and the earth’s surface. The total cost is calculated to equal € 11 billion.

Picturing the European rail freight corridors, the Gotthard plays a vital role connecting Northern Italy and Southern Germany on the Rhine-Alpine Corridor 1 from Zeebrugge/Rotterdam to Genova. In the future, some 260 freight trains will traverse the Gotthard tunnel each day. Assuming that a cargo train carries 25 containers per run and operates 360 days per annum, the Gotthard has the potential to replace 2.34 million trucks crossing the Alps every year. While trucks will have to drive up the mountain and wait in line to pay fees at toll stations, freight trains will reach a maximum speed of 160 km/h traveling on a straight line through the Alps. 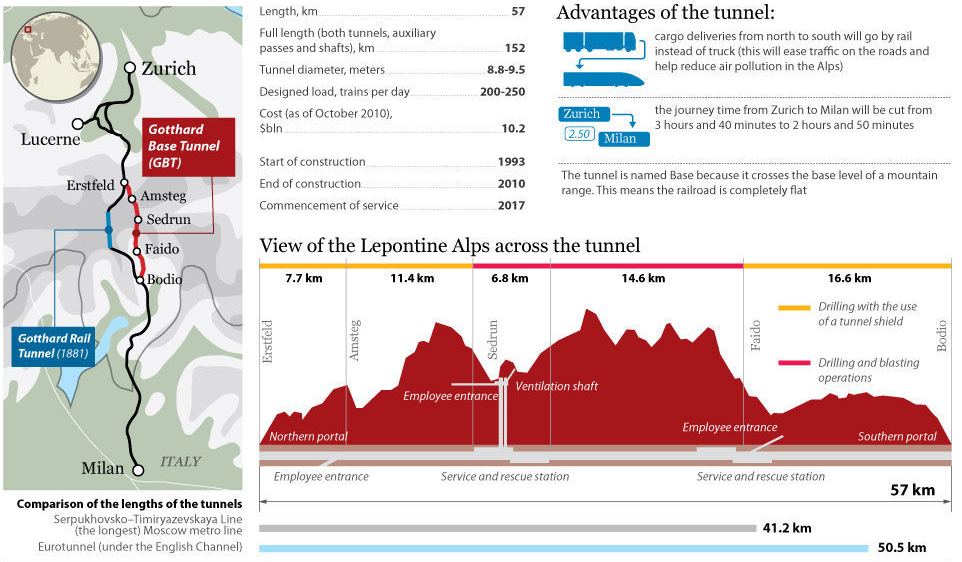 Gotthard Base Tunnel, the longest railway tunnel in the world; Image: rian.ru

As a fixed link tunnel, the Fehmarnbelt will be the longest immersed railway tunnel in the world with 17,7 kilometers tube length. The construction links Rødbyhavn on Lolland (Denmark) and the German island of Fehmarn. In contrast to a bored tunnel, an immersed tunnel is made up of hollow concrete elements, cast on land and assembled section by section to form the tube. The total costs for the Fehmarnbelt link are an estimated € 7 billion.

The train journey from Hamburg to Copenhagen takes currently 4 and a half hours. And the overall travel time between Stockholm and Hamburg is 10 hours by train. With the completion of the Fehmarnbelt tunnel and upgrading of the rail infrastructure on both sides of the link, the journey time will be cut by 2 hours for both routes. There will also be far more frequent departures. Therefore connectivity of the network links increases. Also, a more direct route between Scandinavia and Central Europe means that rail freight will be strengthened and especially the corridor 3 ScanMed will benefit significantly. Hence, rail freight operators are expected to gain a competitive time advantage when shipping goods from Germany to Denmark and Sweden via the Fehmarnbelt. 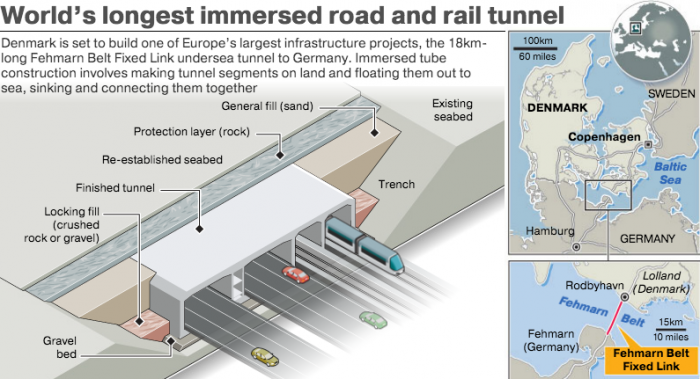 Currently, VDE 8 is the largest railway construction site in Germany. The project is the eights and the last infrastructure investment to connect the Western part of Germany (in this case Bavaria and Hessen) with the former Eastern part of Germany (Saxony, Brandenburg, and Berlin), upgrading the interconnected railway system. The costs for the newly conceptualized rail line VDB 8 from Berlin to Munich will amount to cost € 10 billion. In December 2017 it is expected to be completed. The journey time for passengers traveling from Berlin to Munich is reduced to 4 hours because high-speed trains will be able to travel at speeds of up to 300 km/h. But not only the Berlin to Munich route will have significant time savings, but also cities like Frankfurt and Leipzig will benefit.

The operation of passenger and freight trains on the same corridor at the same time is possible. For trains with high loads, the gradients of the tracks have been kept to a minimum. For a faster train to take over a slower train, there exist facilities every 20 kilometers. Freight trains will be able to go around the cities of Leipzig and Nurnberg, which saves time and decongests the network. Especially the rail freight corridor 3 ScanMed, will be improved by the VDB 8.

4. The Austrian Brenner Base Tunnel

Until the expected opening in 2026, the Gotthard Base Tunnel will be the longest railway tunnel in the world. However, with its 64 kilometers of tube length, the Austrians then will have the longest one. The BBT runs between Tulfes/Innsbruck and Fortezza with an estimated budget of € 9 billion and an estimated construction time of 20 years.

The Brenner Base Tunnel is at the heart of the new rail freight corridor three ScanMed, connecting Scandinavia with mainland Europe all the way down to Palermo in Southern Italy. The tunnel is going to cut the travel time from Innsbruck to Bolzano in half, from the 2 hours it takes now to 1 hour after completion. The ICE from Munich to Verona will take only 3 hours instead of the 5.5 hours it requires today. As approximately 40% of all transalpine freight traffic moves over the Brenner pass, the railway tracks through the Brenner Base Tunnel will be a sustainable transport alternative.

Now that we have introduced these four infrastructure projects, the question arises about their impact on the European railway network. Together with a modern signaling system (ETCS 2) and a centralized train corridor management system the overall network capacity and performance will increase significantly. Meaning a higher volume trains that travel on the network with a higher probability to arrive on time. We are going to follow the developments on both rail freight corridor 1 and 3 closely in the years to come and keep you up to date.