Berlin, March 23rd, 2017. Managing director of Deutsche Bahn AG, Dr. Richard Lutz is presenting the annual report of Europe’s largest railway operator. Even though EBIT grew to 1.95 Billion € (+10.6%), a fantastic result linked to the leadership under Rüdiger Grube, not all parts of the business signal a green light as DB Cargo continues to lose money.

Some experts are quick in their judgment: DB Cargo’s service is slow, expensive and lacks last-mile connectivity. Trucking is, therefore, more competitive and DB Schenker’s growth the best proof. While theses points carry some validity, the caveat is that they describe the effects and not the causes of DB Cargo’s situation.

To understand the market pressures undermining DB Cargo’s business, we start with an attempt to capture the market development in its entirety. What are the important macro and micro economic factors that are transforming logistics and lead to an ever increasing competition for Deutsche Bahn’s rail freight business?

Today, Germany is deeply connected to the flows of international trade. The import and export of rather high-value goods are creating a continuously growing demand for transportation. Secondly, Germany is located in the heart of Europe, thus plays an important role for transshipments to and from neighboring countries. In 2015, the German deep sea harbors managed slightly over 300 million tons of goods for the first time since the financial crisis. After growth rates of 1.9% in 2013 and 2.3% in 2014, the freight transport performance grew to an all-time high of 665.1 billion ton kilometers (tkm) in 2015. 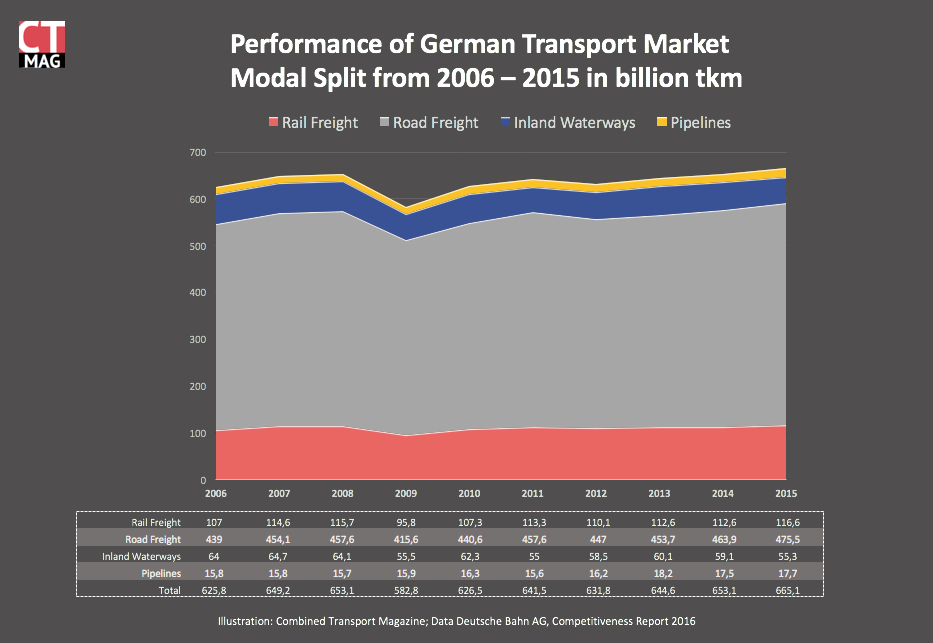 Examining the German modal split of 2015 in greater detail,

As a fact, road freight is the mode of choice for the majority of market players. Now, what are the criteria that determine the modal split and has the German freight transportation system changed over time? To dig deeper, let’s have a look at specific macro and micro economic factors. 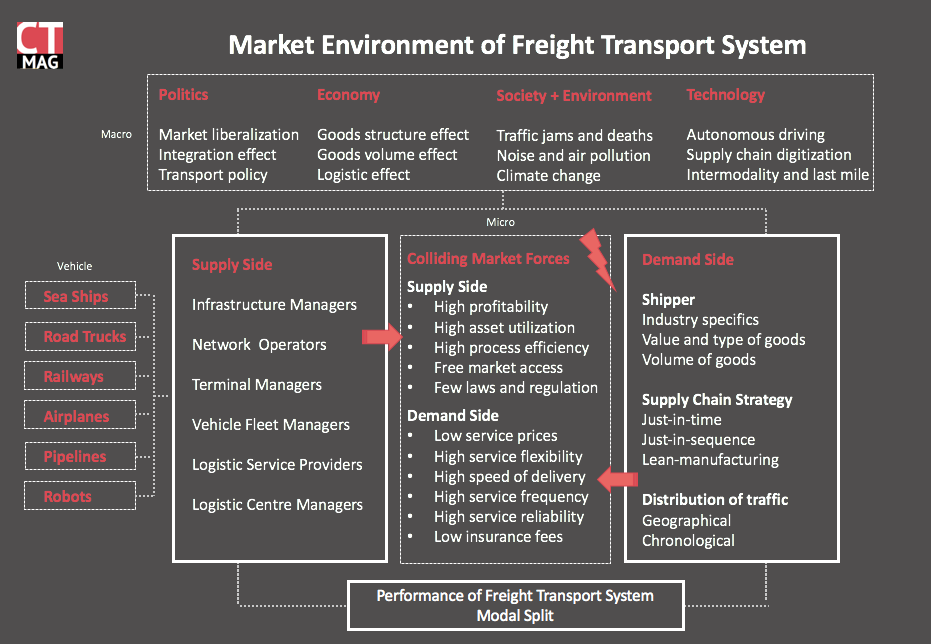 Over the past century, the transported type of goods in Germany changed dramatically. This shift is best described by the goods structure effect. Specifically, demand for low-value, high-volume bulk goods like coal and iron ore moved towards high-value goods and small consignments of e-commerce products or automotive parts for example. While DB Cargo trains are ideal for bulk goods, DB Schenker’s trucks guarantee a certain flexibility to respond to volatility in market demand and seem the better choice to carry palletized goods.

In 1989, the front line of the cold war, which once separated Europe running straight through Germany, evaporated. The integration of Eastern European economies into a single European market followed and would unleash tremendous growth in the next two and a half decades. This integration effect was a catalyst of outsourcing. Low and medium value generating activities of the value chain were outsourced to Eastern Europe first, while entire production lines followed shortly after. The internationalization of supply chains accelerated. For example in the past, German automotive manufacturers would source the majority of supplies locally. Today procurement is globalized and manufacturing of components outsourced across different regions of the world. Hence the demand for logistic services increased over-proportionally also known as the goods volume effect.

Furthermore, these globally connected supply chains have undergone continuous optimization to support the shortening of product life cycles. Companies shortened the process from design to delivery of a product. Novel management strategies like for example just-in-time, lean manufacturing and just-in-sequence were developed and implemented. As a result, stock levels shrunk to a bare minimum and the throughput time shortened, all while manufacturers expanded their product portfolio and reduced the cost of capital deployed. On the contrary, this optimization made value chains more receptive to disruptions and less resilient to shocks. To cope with risks specifically, road and air freight have clear advantages when shipping time critical goods. In general rail freight and therefore DB Cargo’s services are less suitable for highly accurate and flexible deliveries due to the complexity involved in planning and operating intermodal supply chains.

Lastly, the primary driver influencing the shipper is still cost. In Germany the road, rail and inland waterway infrastructure is mainly publicly funded. Therefore governmental policy passed today has a significant impact on the modal split of tomorrow. Government not only influences important price drivers like taxes on fuel, energy or infrastructure usage fees. It also has a say in where to rebuild and expand the infrastructure network and how markets are regulated. Firstly, until 2005, road freight forwarders were not charged for driving trucks on the German Autobahn at all. Secondly, railway operators face an increase in energy prices due to the German Energiewende. Thirdly the introduction of Gigaliner trucks versus discussing 740-meter trains without taking action. Finally, rail freight operators are charged traction fees for every kilometer on the railway network, while trucks still use rural roads for free.

Ending the first section, in Germany road freight is the dominating mode of transportation today with a 70% market share. Shippers demand low prices, high speed and precision in deliveries, which are caused by the goods structure and volume as well as logistic effects. Public policy influences the competitiveness through taxes, infrastructure investments, and regulations. 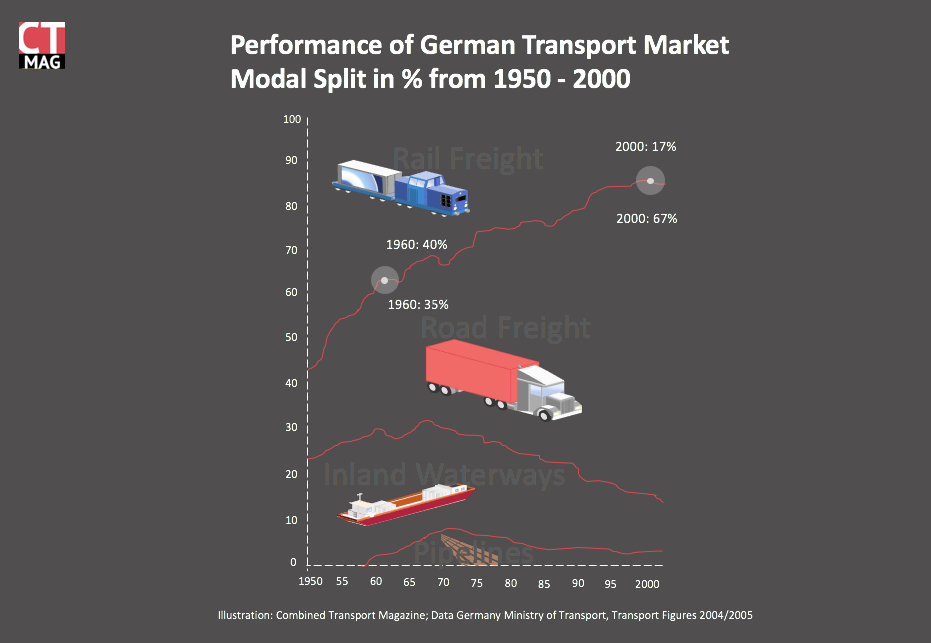 With this in mind, the graph above shows the drastic transformation of the German freight transport market between 1950 and the 21st century. In 1960, rail freight still accounted for 40% of the total market while road freight had a market share of 35%. Since then the market turned upside down, and road freight doubled its market share to 71%. In other words, in 1960, Deutsche Bahn was the monopolist, with its rail freight business accounting for 40% market share. After the liberalization in 1994, 216 licensed companies are offering rail transport services today while the market share of rail freight has contracted to 17.5%.

Talking about competition, the new market players are breathing down DB Cargo’s neck. While DB Cargo’s rail freight performance of 2014 was below the level of 2002, the competing market participants grew their volumes from 3 to 37.8 billion tkm in the same period – a tenfold increase. Thus every third freight train is managed by a private operator today. 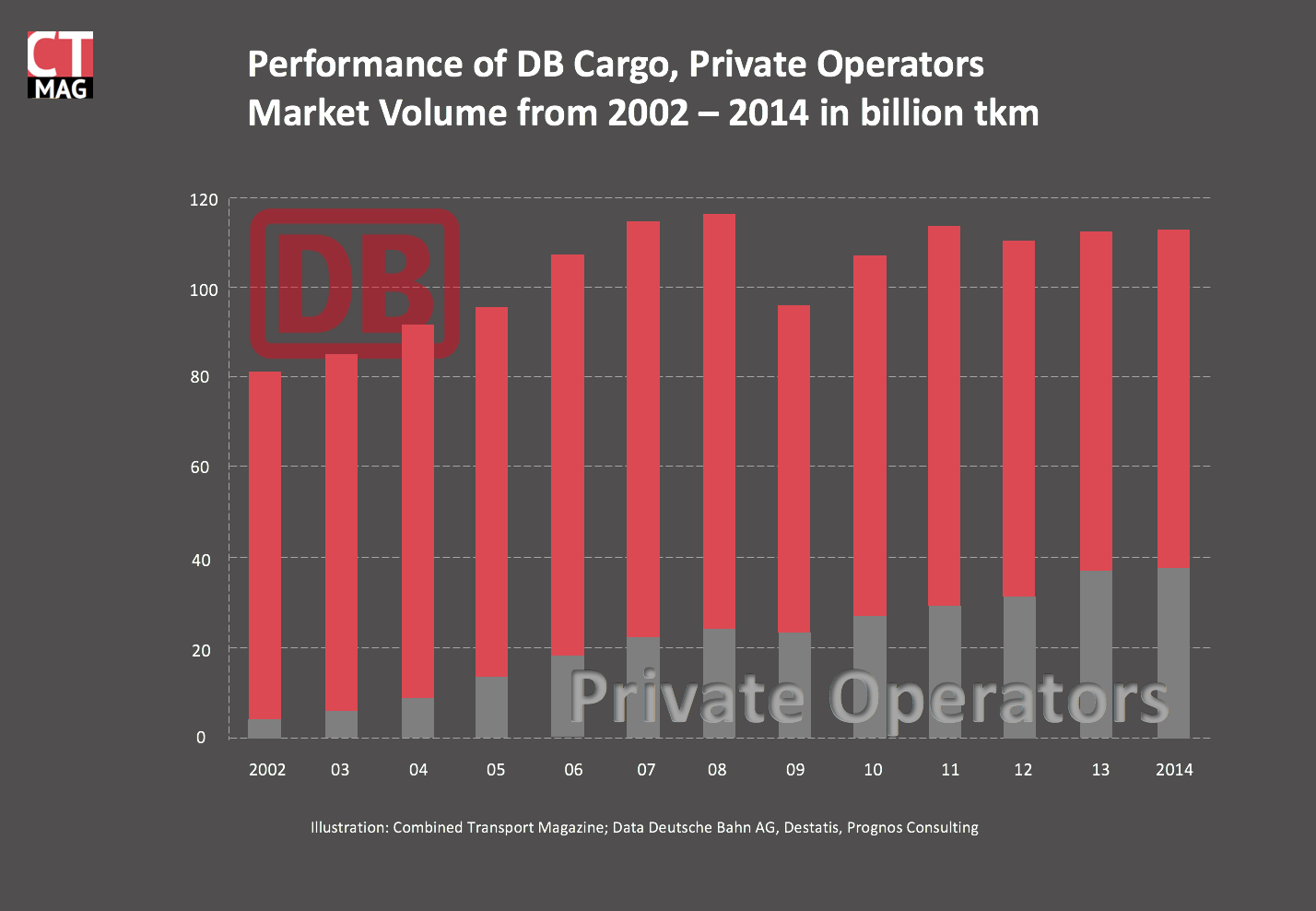 Of course, DB Cargo is still Europe’s largest rail freight operator. In 2016, the company’s revenue amounted to 4.6 billion € with an EBIT of negative 81 million € (-183 million € in 2015). DB Cargo operates a fleet of 4.362 cargo trains per day with 2.817 locomotives and 84.827 rail cars under management and the most diverse service offering in the industry.

However its main advantage, its heritage and extensive operations, is also DB Cargo’s biggest weakness. DB Cargo CEO Jürgen Wilder explains: „We will need to change our philosophy fundamentally. We will offer a single wagon system that is tailored to specific client needs. Our sales teams will then have the responsibility to ensure a maximum capacity utilization.“ Concerning the sales strategy, Wilder continues: „We will focus on three market segments: industrial (bulk goods), logistics (consumer and capital goods) and intermodal (combined transport).“

As shown in the next graph, traditional mass market segments e.g. coal and steel and energy supplies are losing significance for rail freight in Germany. Secondly, the handling of single wagon loads, which is mainly used by the automotive and petrochemical industry in Germany is only in a few cases a profitable business for DB Cargo. 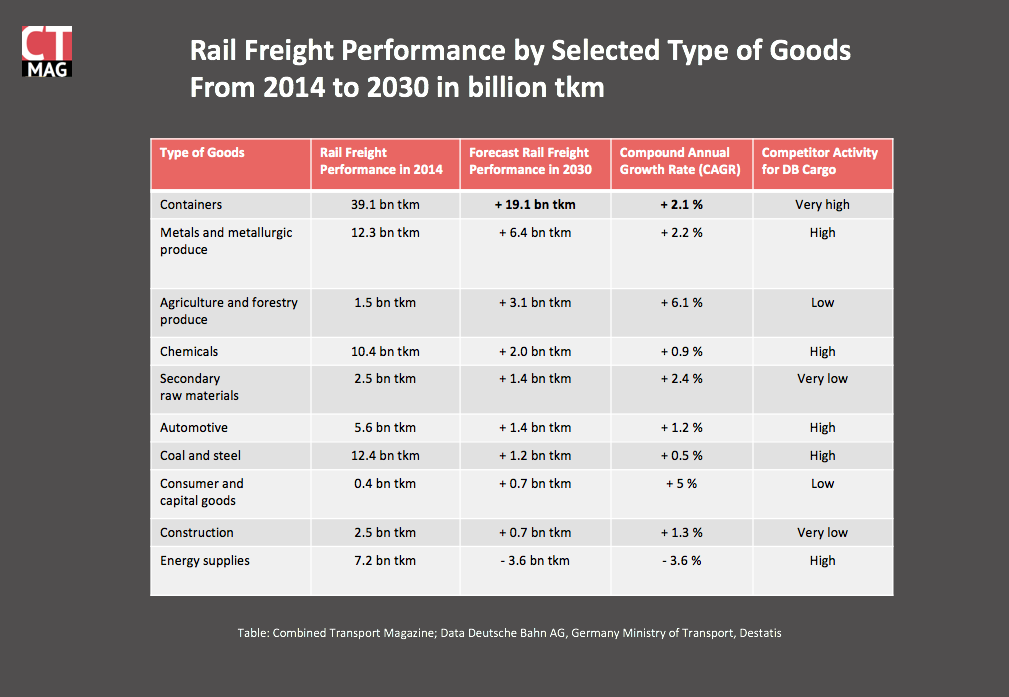 The introduction of containers has been the primary driver of global trade. Containers arrive and depart on sea ships in for instance in Hamburg, Rotterdam, and Antwerp. The bundling of loading units is perfect to operate shuttle trains with high capacity utilization. These shuttle trains accounted for 39.1 billion tkm in 2014 and commute between the sea harbors and hinterland terminals, from where trucks take over last-mile operations. This sizeable and profitable market segment is forecasted to grow by 2% each year.

Competitors are also focusing their activities on combined transport, and the intensity of competition between private operators and DB Cargo is increasing year by year. With 7.2 billion tkm, TX Logistik the daughter company of Trenitalia has managed to become the second largest operator in 2014. Captrain which is a subsidiary of the French SNCF achieved a rail freight performance of 6.6 billion tkm. In the fourth position with 6.0 billion tkm delivered, SBB Cargo International, a joint-venture of the Suisse SBB Cargo and Hupac. The largest operator, which is not associated with a former state-owned railway company is RheinCargo, who transported 3.6 billion tkm in 2014. Boxxpress (3.1 billion tkm), METRANS (1.7 billion tkm) and Havelländische Eisenbahn (1.1 billion tkm) are completing the top eight market players.

Summing up only a few companies, who are mainly associated with former state-owned railways operators, handle most of the market volume. They are attacking DB Cargo in the market segments which have a considerable size and are forecasted to grow and are increasing the pressure on prices and quality of service.

All rail freight operators together need to compete against road freight. According to a forecast of the association of German Transport Companies (VDV), operational costs drivers for rail transportation will increase by 18% between 2014 and 2020. Especially the cost for rail wagons (7%) and locomotives (4%) is expected to climb, making it less competitive to the road. 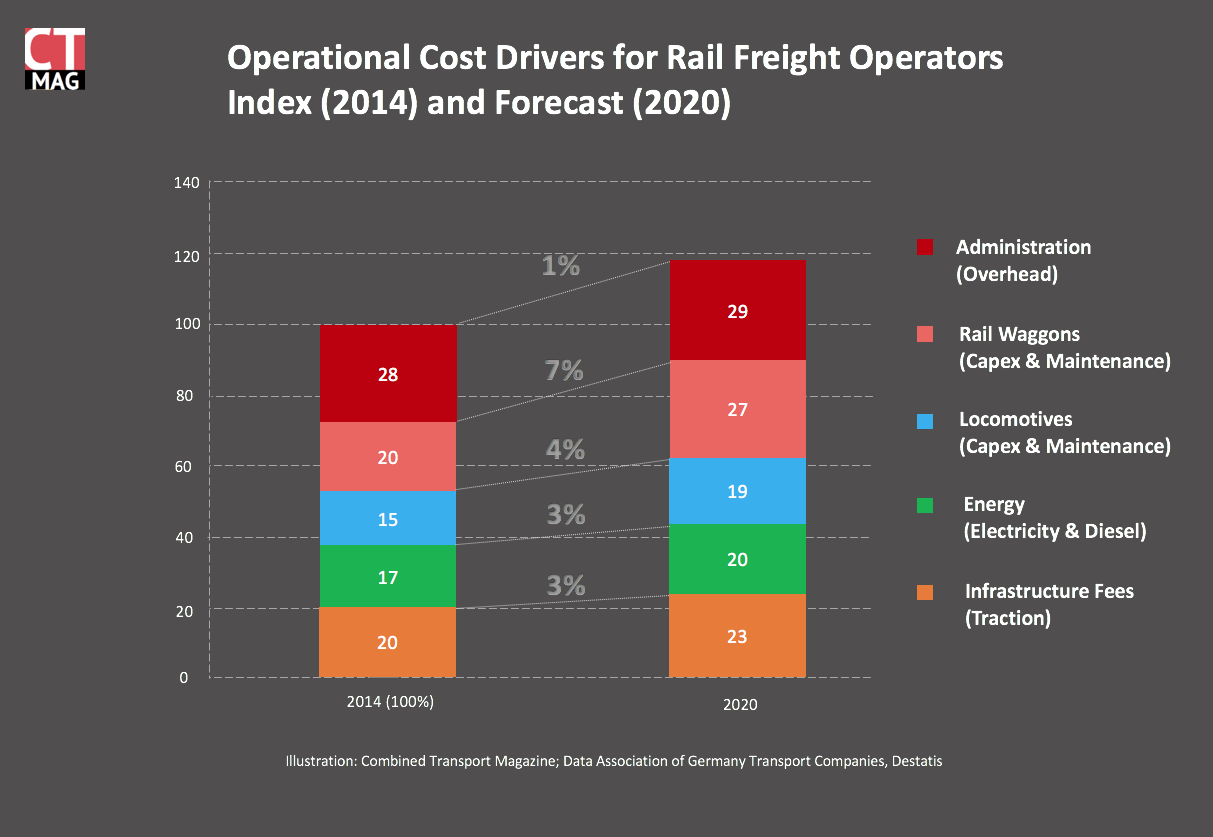 Until 2020, rail freight operators will have to equip and maintain the majority of their rail wagon fleet with a novel braking system (K-Sohle) to reduce noise pollution. Furthermore, rail freight operators need to update their locomotives with onboard signaling systems to comply with TSI norms and achieve the integration of the European Train Control System.

While these initiatives are useful in increasing the acceptance and competitiveness of rail freight in Germany in the long-term, they are a burden for operators in the next years. Furthermore, prices for oil and therefore diesel are cheap, and rail freight is affected by climbing electricity costs for traction due to the participation in the German Energiewende.

Already accounting for the majority share in 2014 (28%), the costs for administration are increasing further because of EU norms (2004/49/EG; 1158/2010/EU). Each railway operator is required to proof a fully functioning safety and security management system (SMS) and might face additional auditions by the German Railway Agency (EBA). Of course,  strict safety and security norms for rail freight make sense. At the same time, all statistics show, that rail transportation is by far the safest of all modes. Each rail freight operator now has to proof their operational excellence on paper as well.

Summing up, DB Cargo and all other market players are highly regulated while the majority of cost drivers are increasing in the immediate future. Rail wagons and locomotives are designed and constructed to operate for 40 years. Hence innovation cycles are long, and the transformation of the business is a tough undertaking. To end with a quote from Einstein: „We cannot solve our problems with the same thinking we used when we created them.“