The growing demand for road freight is a threat to the European and Chinese road networks. More traffic on roads equals an increase of CO2 emissions , traffic congestion, and accidents. Hence, societies face high external costs due to the imbalance of the modal split. If companies would like to shift freight from road to rail, semi-trailers (73% of the market share) need specialized equipment. The CargoBeamer system opens up the railway market to all semi-trailers, allowing the shift of cargo from road to rail to happen today. 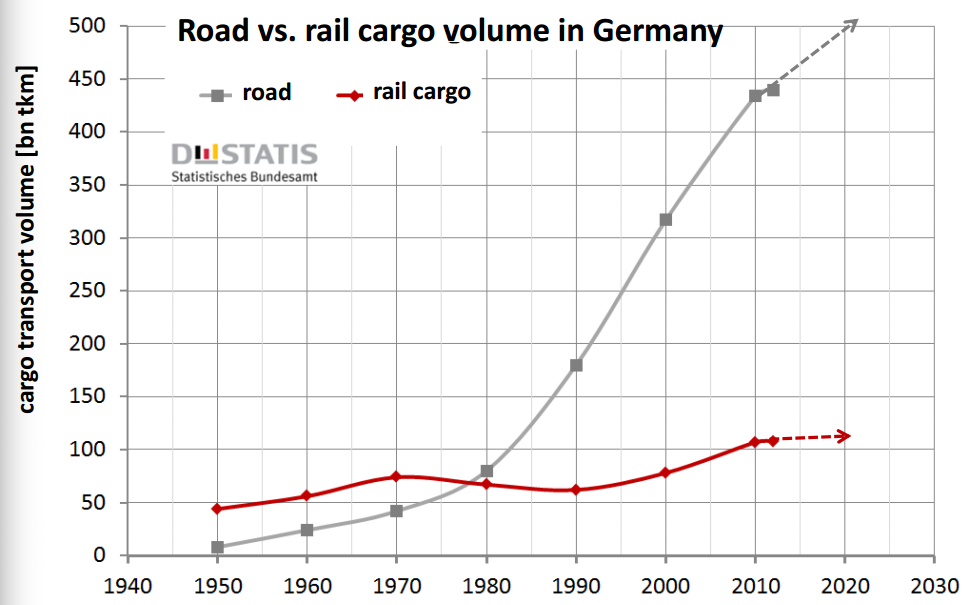 Demand for freight transport in billion ton kilometers in Germany from 1950 to 2020; Source CargoBeamer AG

The European freight performance of trucks carrying semi-trailers is 318 billion ton kilometers (tkm) per year or 72,4% market share of all road transport in 2015. An analysis of the Alpine crossing done by the Suisse Kanton URI uncovers that Silo (4,7%), Reefer 17,8%), Mega (7,3%) and Standard (52,9%) trailers would become compatible to efficient rail transport deploying the CargoBeamer system.

How does CargoBeamer’s technology function?

CargoBeamer’s technology incorporates a universal semi‐trailer loading ground plate, which serves as an adapter. The ground plate is shifted from road to rail and vice versa using mechanical arms built into the terminal. All road semi‐trailers fit onto these ground plates – at once, without any modifications. One main advantage is, that CargoBeamer is compatible with the existing terminal infrastructure, as portal cranes and reach stackers can lift the ground plates (adapters). Therefore customers can use all available, conventional terminals. However, the semi-automated, horizontal loading functionality only increases the annual throughput of a terminal, if there are at least a dozen loading bays installed.

On which routes is CargoBeamer operating?

All EU member states certified the technology. In 2013, the first operation was set up for Volkswagen AG between France and Germany to bundle inbound logistic flows on the rail. Between 2013 and 2016, 1738 mega trailers have been successfully shipped using CargoBeamer and 338,6 tons of CO2 have been saved. The service incurred 0 disruptions, and terminal availability was at 99,89%. 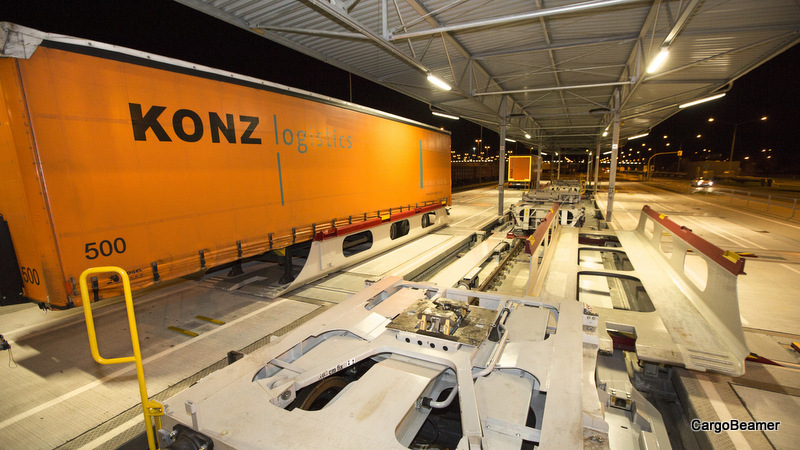 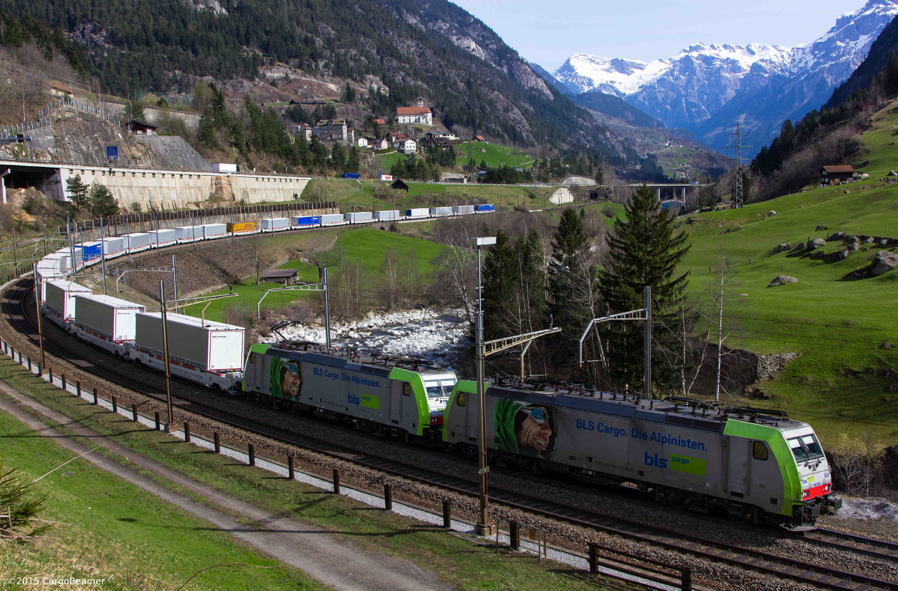 Double traction by BLS Cargo on the railway service from Germany to Italy; Source CargoBeamer AG

However, the company is conservative to advertise an extensive European network. Too often, expansion plans have been put on hold. In densely populated and industrialized urban areas, it is not trivial to identify and lease suitable land to construct terminals. CargoBeamer had to learn the hard way, when the company was aiming to acquire a piece of land in Hagen, Germany. Local citizens protested.

What are CargoBeamer’s expansion plans in China?

That is why CargoBeamer is not only trying to enter the European market, but they now have started to plant seeds in China. CargoBeamer is proposing an entire transportation system for the New Silk Road and it’s Belt (railway) corridor. The company claims to accelerate the transition between rail gauge interfaces and aims to reduce the complexity of operations, due to the semi-automated cargo processing of freight.

To enter the New Silk Road market, the company has further developed and optimized its system. Particularly interesting is the development of a high volume land container which has been designed for robot-based un-/loading. It is the perfect fit for the needs of automotive and e-commerce. The optimal usage of loading space would guarantee to fit 88 standardized industrial boxes onto a single rail car with a length of 19 meters. Compared to a 40-foot container, the CBoXX increases the transport weight by 80% and volume by 57% – which is why Volkswagen nominated CargoBeamer for the “Top 10 Innovative Supplier” award in 2015.

Looking at the New Silk Road, goods from the production sites in China are shipped to the end consumer in Europe using containers. The loading procedure is high manual and not automated. Furthermore, every container needs to be craned at least four times. This not only slows down the transport speed but also increases operating costs.

CargoBeamer automizes this transport chain. Six manual handling processes are reduced to four fully automated steps, resulting in a significant cost and time reduction. As the un-/loading of the CBoXX is robot-based no manual commissioning is required. The rail gauge switch between China and Kazakhstan as well as Russia and Europe is fully automated as well.

For freight forwarders, costs are one of the most significant drivers in choosing the mode of transportation. And CargoBeamer’s CBoXX makes rail transportation incredibly attractive to them. The company claims that the system cuts transport costs by 50% per load unit – compared to a standard 40-foot container. For an industrial box used in the automotive industry, the assumed price is 72.00 € for sending supplies from China to Europe via rail. CargoBeamer forecasts a cost of 36.00€ with their system, mainly due to the elimination of manual labor and reductions for the terminal, road, and rail transport costs. 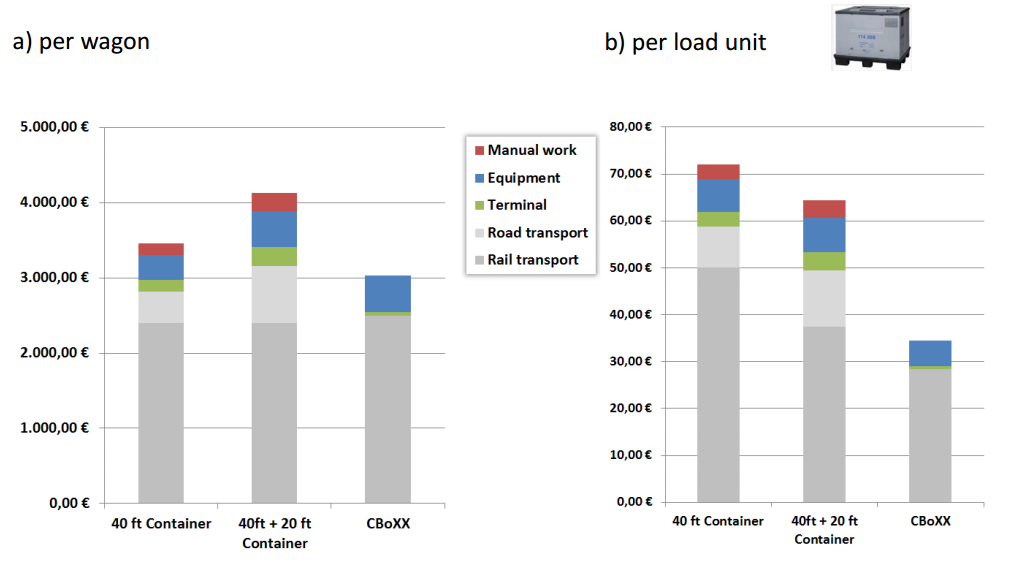 The second important driver is the speed of delivery. Door-to-door shipments via ocean vessels take up to 45 days from China to Europe, including last-mile operations and terminal handling. Container trains already shorten the time by 60% and achieve a door-to-door delivery in 18 days. Due to time savings of terminal and rail gauge switching as well as the reduction in last-mile operation and robot loading of CBoXX, CargoBeamer forecasts to reduce the transfer time to 12 days. After completion of upgrades to the railway network in Russia and Kazakhstan – which are currently ongoing – CargoBeamer envisions a train to run at 70 km/h and achieve the door-to-door transport from China to Europe within eight days – nothing short of revolutionary and a real threat to sea and air freight. 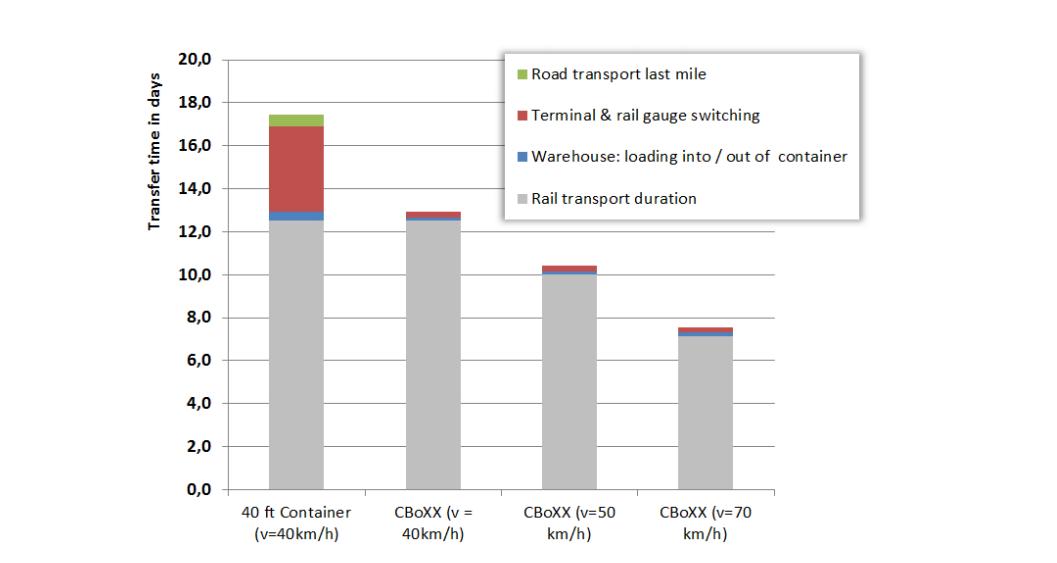 What is the environmental impact today?

Back to reality, CargoBeamer is an innovation which enables environmentally friendly rail/road transports as you read this.  The CargoBeamer intermodal transport system opens up rail transports for all semi‐trailers, offers modular and compact terminals which have a high throughput and can automize the gauge switch. CargoBeamer not only brings high benefits for logistic companies. Each semi-trailer send by train reduces road wear, accidents and traffic jams which amounts to annual savings of 3,6 Mio. € for one train set. This is taxpayers money that can be rebudgeted for infrastructure investments. Furthermore, electric locomotives can use renewable energy – but even without using renewables – the energy consumption is reduced by 70% while emissions are cut by 76% compare to road freight. So if you are looking forward to booking environmentally friendly transports today, look no further and connect with CargoBeamer.