Roughly 100 years ago, in 1914, the construction of a new harbor inside the city boundaries of Berlin began. The Berlin Hafen- und Lagerhausgesellschaft mbH, short BEHALA, opened up in 1923 to offer logistic services for the growing city. Initially focused on inland waterway shipping of bulk goods like coal, for example, large volumes were transported to supply the nearby coal plants in Moabit, which generated the electricity for Berlin.

100 years later, BEHALA is still a 100% state-owned company but has diversified its business into three main segments: logistics, real estate and storage solutions. Ships can arrive via inland waterways (Spree, Havel, Elbe and the Oder) and trains run on the German railway system (freight terminals in Moabit, Lehrte, and Hamburg). The proximity to highway A100 makes it convenient for trucks to pick up and drop off goods. Hence, the trimodal terminal is well connected to the surrounding infrastructure.
With a total surface area of 430.000 square meters, Westhafen is at the same time the biggest harbor in Berlin. With the changing needs of the logistic industry, BEHALA remodeled the former coal storage area into a combined transport terminal in 2005. At the beginning of operations, one portal crane and a mobile reach stacker managed to shift 20.000 TEU per year from road to rail. 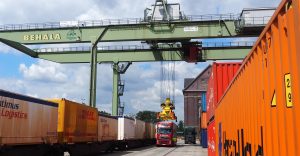 The German Ministry of Transport (BMVI) decided to improve the conditions for combined transport in Germany and offered subsidies for terminal operators in 2008. BEHALA made use of these funds to finance the expansion of their railway tracks, which were then stretched to two tracks each 400 meters long. The infrastructure upgrade made it possible to service a full train split over the two tracks. Moreover, a second highly performant portal crane was installed.

As a result, BEHALA successfully attracted new customers and grew its business sustainably. Daily trains between Berlin Westhafen and Unna/Böhnen are operated to service DHL today. The Zippel Group is benefiting from combined transport to ship Bosch Siemens home appliances and BMW motorbikes from Berlin Westhafen to Hamburg. As a consequence, the total volume of shifted loading units grew from 20.000 TEU in 2005 to 120.000 TEU in 2015.

BEHALA is striving to improve their competitiveness and is also investing in research and development. The project „KV-E-CHAIN“ was executed together with Terberg and DHL to test a fully electric truck on the last mile. Loading units that arrive at Westhafen often have to be transported to the inner city of Berlin. The full electric and emission free truck delivered first positive results and needs further research and development to improve reach and overall battery lifetime. The project is a significant opportunity for last mile operations in decarbonised intermodal supply chains. 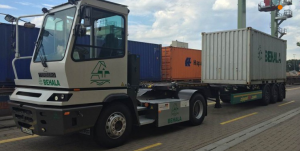 As the Westhafen is attracting more and more freight, BEHALA is planning to expand the storage area for empty containers. From 2017 on, there will be extra space to store an additional 1000 containers, which will enable BEHALA to continue with their growth journey.